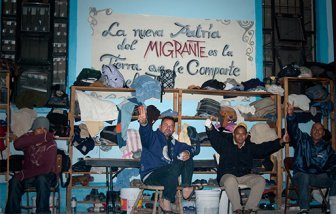 From the headquarters of the Casa del Migrante in Saltillo, which currently serve as dressing rooms, you can hear the kitchen nonstop. Bread literally multiplies in here.

While we are getting dressed to present the show of Atrapasueños Cabaret, at least 300 migrants dine at the table outside. They are from Honduras, Guatemala, Salvador and Nicaragua. Poverty or violence in their communities drove them north, in hope of finding a better life. They left behind their children, parents, wives, friends, lovers.

Most of them entered Mexico via Tapachula, Chiapas, to hop on “The Beast,” a freight train transporting an extra illegal merchandise: the illusion of more than half a million souls who travel every year holding on to the roof of the wagons.

Along their journey, they went through all kinds of humiliations. They were robbed, beaten, and kidnapped by the organized crime as well as the police and the immigration agents.
That is why we have come here, to share our support and affection through a show that speaks about the importance of following one’s dreams. In the end, we are also migrants, like everyone else here.

Being human is forbidden 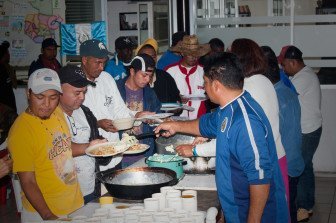 Migration has been a part of human history from its origins. However, the strange logic of liberalism has turned it into a felony, for today the borders are open to merchandise, not people.

It is about a process of criminalization that strips down the worst in governments: racism, bigotry and the inability to design migratory policies that ensure the most basic human rights.

This turns out to be very ironic, at the least, for it is migrants, undocumented people, outsiders, who support the base of the economy of the countries rejecting them.

That is when the phenomenon becomes forced, since for many there is no other option than migrating in order to make a living, even if it means risking their lives.

And on that death-road, there are few havens where they can lick their wounds. One of them is the Casa del Migrante in Saltillo, in the state of Coahuila, only a few hours away from the American Dream.

“We never thought we had accumulated enough for a decent house. We didn’t have any funds, but the wave of migration that increased with the pass of Hurricane Mitch through Central America, in 1998, and the murder of the Hondurans Delmer Alexander, David and Ismael de la Cruz, in Saltillo, in 2001, were the triggers to open the shelter and establish the nonprofit organization Frontera con Justicia (Border with Justice) in 2004.” says father Pedro Pantoja, founder of the Migrant Home. 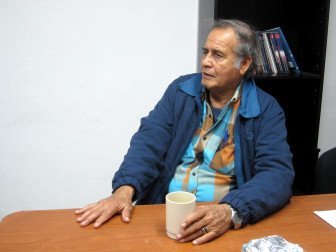 Since it was founded eleven years ago, this home has sheltered more than 200.000 migrants. The NGO is part of a network of 54 shelters in Mexican territory that, in addition to providing temporary shelter to migrants, is looking to put the migratory phenomenon in the center of social struggles.

“We try to be the social and political coverage of this impoverished and forced exodus. If the Central American consulates joined us, we would save many lives and avoid tragedies”, says Pantoja, referring to the massacre of 72 undocumented people in San Fernando, Tamaulipas, in 2010, which showed the tip of the iceberg in this issue.

According to the activist, there are many other cases, reported and documented by Frontera con Justicia, that show lack of a minimum rule of law, since many police corps, lawyers, prosecutors, and district attorney offices are accomplices of a moral genocide.

“It is moral death for a migrant who sold his property, got into a 3.000 dollar debt to pay a coyote*, and who left his family helpless, to be detained and deported just when he’s about to cross the Rio Bravo. He’s dead in that very moment.” adds Pantoja.

He also describes migratory stations as actual prisons, where most migrants are “sold” to the organized crime by the same authorities.

“For the Mexican legal system it is not a crime for a police officer to strip a migrant of his belongings or to kill a migrant who is starving after walking thousands of miles. And if he demands justice, how is it helpful for this migrant if the process may go on for years? Why then do they come if they go back worse than before? Beaten up, mutilated, or in a coffin. It is a migration with no future,” he says.

And he concludes: “How many more deaths do you want? That’s the question we ask the government. This impoverished and forced migration has the right to free passage.” 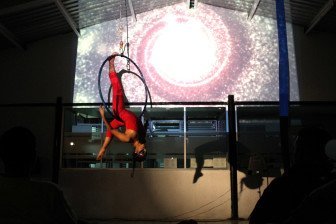 “I’m sure you all know it, so I hope you’ll sing along with me”, says Eduardo Calderón, during the interlude of the Cabaret. Thanks to this psychologist-artist-activist and very good friend of ours, we are about to live one of the most touching moments of our journey.

The voices of 300 of our Latin American brothers and sisters come together to sing the chorus of a song by Jesús Adrián Romero, which has become the anthem of the migrants: “Tired of the road, thirsty for you, a desert I have crossed, I’m left without strength, I come to you.” The energy is such, that it becomes impossible to hold back tears.

And so the name of our humble act makes even more sense, since most of the migrants wear a dream-catcher around their necks. It is no coincidence. They are an army of dreamers.

The air of humanity that we’re breathing makes it impossible for us to understand the cruelty of the government against these people. We are filled with shame. Especially in these times where we celebrate the Independence of Mexico. Celebrate what? We should be apologizing.

At the end of the show, we are overwhelmed by displays of affection and gratitude like never before; not even on those international stages we shared with Eddy as part of a company of Mexican folklore.

As artists, this experience has been among the most rewarding. A proof of the power of the social circus, that art can change the world, if only for a few minutes.

Also, as human beings and wanderers, we prove that which travelers all over the world repeat time after time: “those who have the least give the most.”

It was an unforgettable afternoon that we would relive a few days later through a local newspaper, right before crossing the US border. Once there, even with the privilege of a tourist visa, we would feel a bit of the injustice suffered by thousands of Latin-American migrants every day.

Acknowledgments:
To the Migrant Home in Saltillo
To Father Pedro Pantoja and Mother Lupita, for having us.
To Eduardo Calderón, for inviting us to the House, for his support and affection.
To all migrants and friends who went to the Atrapasueños Cabaret, particularly Jorge, from Honduras, for helping us with the lighting and stage machinery.
To Sheila Hernández Cázares, who served as a photographer.
To mommy and daddy Mihi and to “La Tía,” for their help in the kitchen on the day of the show.
To Kowanin Silva, César Gaytán, Omar Saucedo and Elí Vázquez for the beautiful article in Semanario.
Again to Pancho and Myrna for being with us until the last moment.

* coyote: name of the illegal smugglers who propose their services to migrants to cross borders.