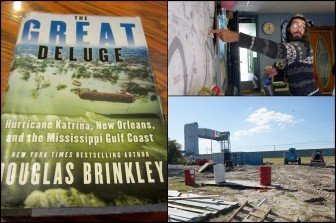 “Look, here we are now,” says Thomas, while pointing at the cover of the book The Great Deluge. The aerial image shows an entire neighborhood underwater.

It is Lower Ninth Ward neighborhood, a day after New Orleans was hit by hurricane Katrina, in 2005. They say it was the deadliest natural disaster in United States history. But what is true is that the wind did not deal as much damage as the series of human and political mistakes, which took the life of more than 1,600 people. Most of them from this poor, black neighborhood.

We came here inspired by another book by the siblings Amy and David Goodman*, whose title summarizes the constant search of this journey: Standing Up to the Madness: Ordinary Heroes in Extraordinary Times*.

The cover of the Spanish version shows a person driving an American flag into the ruins of Lower Ninth Ward, and one of the first chapters is dedicated to Common Ground Relief, a group of neighbors who, in the face of the incompetence from the authorities, organized in order to lead the rescue and reconstruction tasks.

“Eight years after the catastrophe, we’re still trying to repopulate the area,” regrets Thomas Pepper, executive director of the organization.

This is their story… 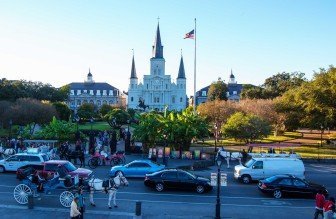 After half a day on the highway from Houston, Texas, the swamps announce the arrival to the state of Louisiana. Behind us the monotony of Interstate 10, which we went over from our entry to the U.S. The landscape, the vegetation, the rusty bridges… even the air you breathe is different.

The feeling intensifies as we exit the highway towards Uptown New Orleans (NOLA), where Jonathan and Lesley, a couple of artists we met in Chiapas, await. The wooden, European style houses, the trolley, the parks, the cyclists… the scenario makes us doubt whether it is really North America.

Even so, the atmosphere seems familiar, and it is no coincidence: Hollywood has chosen NOLA as one of its favorite sets, so after oil and fishing, the film industry stands as one of the most important incomes for the city. At this moment they are filming the movie Focus, starring Will Smith, in which Tadeo will take part as an extra in the scene shot at the Superdome, The Saints’ stadium*.

Our temporary home is in Magazine Street*, one of the liveliest and quaintest streets in the city, along which our hosts take us to discover Louisiana’s gastronomy (a mix of French, Spanish, Caribbean, and African cuisine). It was not long before we became fans of Po Boy*, a delicious baguette sandwich, usually stuffed with seafood and dressed with the famous local sauce: Tabasco*.

We also go through the typical French neighborhood cafés, and spend bohemian times in the famous Bourbon Street*, including a crazy costume Halloween night.

Jonathan and Lesley’s hospitality is such, that we are even thinking about waiting out the coming winter there (Tadeo will). However, we do not forget that we came after the story of Lower Ninth, and that is where we are headed. 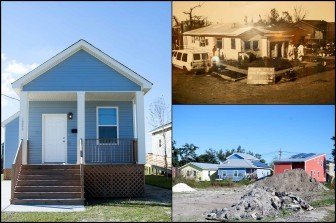 The neighborhood does not seem very populated, but its streets are clean and we see only a couple of wrecked buildings. The rest of the houses are new or under construction.

We find it difficult to picture the devastation from only a few years ago. “The dike system actually gave in a few blocks away from here, so the water got past the tree line,” Thomas recalls. Years later, the the United States Army Corps of Engineers (USACE) would be found guilty for the system failure, although that would be only one of the factors that unfolded the tragedy.

Around 18 thousand people lived in the district back then, mostly colored, working class people about to retire, and with the hope that their pension would help them pay their mortgages. “The law states that if you live next to a federal dike, you don’t need flood insurance, because supposedly there are quality standards, so when this happened, people here lost everything,” Pepper carries on.

Today, barely a third of that population has come back, that is why Common Ground Relief has gone from emergency tasks (food supplies, medicines, and construction tools) to repopulation. “We’re trying to build schools and parks in order to convince young people to buy land, build their house, and start a family,” he says.

For that matter, the NGO has a legal clinic that provides assistance so as to get construction permits and access government grants, among other paperwork.

A hurricane of mistakes

Despite the alerts of the meteorological services on Katrina’s ferocity, days before it touched the ground, no authority responded.

President George Bush –who was later found out was warned about the fragility of the dikes– did not interrupt his vacation at his ranch in Texas. His good friend, Michael D. Brown, head of the Federal Emergency Management Agency (FEMA), would accept years later that it was attempted to “federalize” the case, so as to blame the governor of Louisiana, the democrat Kathleen Blanco. Abandoned by the federal and state government, Ray Nagin, the mayor of NOLA, declared an immediate evacuation, but it was too late.

“Many people didn’t have the financial means to evacuate, and even when they tried, they couldn’t, because the streets looked like a parking lot,” Pepper recalls. “And the people who tried going out southward, ran into a sheriff (and armed neighbors) saying: ‘you can’t go through here.’”

The storm also awoke racism. The Army forces, as well as state and local police, patrolled the wealthiest neighborhoods “in order to avoid plundering.” “If a white man took something, it was food for his family; if a black one did, he was stealing,” Malik, one of the affected, digs up in the Goodmans’ book.

Facing this injustice, the ex-black panther sent a message in a bottle into the internet ocean, asking the help of “anyone with any life-saving ideas.” The first to answer were the Veterans for peace. Then doctors and voluntaries joined in, among them the documentarist Michael Moore, who donated 40 thousand dollars to the cause. In fact, the labor of film-makers like Brad Pitt and Sean Penn filled the voids left by the government.

In a heated debate among activists, someone told Malik: “what you have to do is to find a common ground.” Hence sprang the name of an organization that became so effective and respectable, that most of the aid to the affected – even the official help –, started to flow through them.

“People began to feel empowerment. It was something beautiful, seeing how those who never thought of talking to the president or having a senator at home, had the courage to tell them: ‘if you don’t do your job, we’ll put you on a bus away from here,” Thomas reminisces. 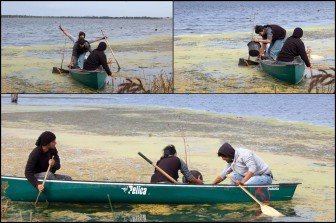 Another one of the labors led by Common Ground is the replantation of endemic species, in order to avoid erosion in the lands adjacent to the dikes. “We try to prevent erosion on the tree roots caused by the waves from passing ships, so we plant weeds to weaken the waves before they hit the coast,” says James Stram, swamp project coordinator.

“They also foster sediment accumulation, which creates new ground,” he adds. “The problem is the government policy. I mean, it’s good to have voluntaries to help us plant, but it would be better if the government hired thousands of people. There are organizations who have the money to buy the plants, but not to pay for a staff to plant them.”

A solution would be, James suggests, for private companies to have the staff and equipment ready to be hired by the government. “Tomorrow, for example, we’re going to be just five or six people. How much do you think we can do?” he laments.

When the interview is over, “Smitty” approaches, a neighbor from around who sometimes drops by to say hello. We ordered pizza and enjoyed the jokes of this colored man of about 70 years old. Well at least what we got from his strong southern accent.

He then invites us into his home, where he tells us his sad experience during Katrina, which is documented in his book Exiled in paradise, which starts out strong, with a rape. Suddenly, the anecdote seems to bring the past back to life, and we start to feel one of the most painful wounds in United States history in our own flesh.

The following day, we go back to Lower Ninth in order to help those who try to scar that wound. Among them, a group of young voluntaries from many nationalities, set up a couple of blocks away from Common Ground headquarters. The smell of comradeship is almost as good as the coffee served in their camp.

After a brief introduction, we prepped the canoes, and into the water we go!

The cold is searing to the face, but the heart is happy and the morning flees while we balance on the containers to plant cypresses.

In the afternoon, we go back to land to handpick the living plants out of a cargo agonizing for lack of personnel.

When night falls, we leave, a little sad for not being able to stay longer, but happy to have known this “common ground,” where neither wind nor politics could tear through the roots of the men of the swamp.

* Amy and David Goodman: founders and hosts of Democracy Now, a news network that changed the history of independent journalism in the United States. They broadcast through more than 900 radio and television stations around the world.

* Standing Up to the Madness: Ordinary Heroes in Extraordinary Times, is a book that puts together stories of common people who face the United States government to defend their rights. “Amy Goodman (the author) has taken research journalism to a new level of analysis, thrilling, informative, and clever. Her tireless determination leads her to ask the most challenging and difficult questions, with a relentless style that is full of courage,” says Noam Chomsky about the author.

* The New Orleans Saints: the football team playing in the NFL. The name “Saints” makes reference to the Day of All Saints (November 1st), and their spiritual anthem “When the Saints Go Marching In” is strongly linked to the image of New Orleans.

* Magazine Street: an important street in New Orleans that follows the course of the Mississippi river. Its name was taken out of an ammunition shop located in the area.

* Po Boy: his name derives from poor boy. During the crash of 1929, a restaurant in New Orleans, property of two ex-trolley drivers, used to serve seafood and fish sandwiches to strikers who they called “poor children,” as a joke.

* Tabasco: despite popular beliefs, this famous sauce is not Mexican, but American. Before the Recession War (1861-1865), Edmund Mcllhenny met a traveler in New Orleans arriving from Mexico, a so-called “Gleason,” who gave him a bunch of red chili peppers to season his food. Edmund decided to plant the chili peppers in Avery Island (87 miles from New Orleans), where his wife’s family lived. The war chased the family out of the island, and upon their return they found the lands covered with chili plants in bloom. In 1868, Edmund began to experiment with the sauce until he arrived to the recipe known today. Its name comes from the Mexican region of Tabasco, where the chilies came from. Tabasco means “hot and humid land” in Náhuatl, which explains the success had in the Avery Island plantation.